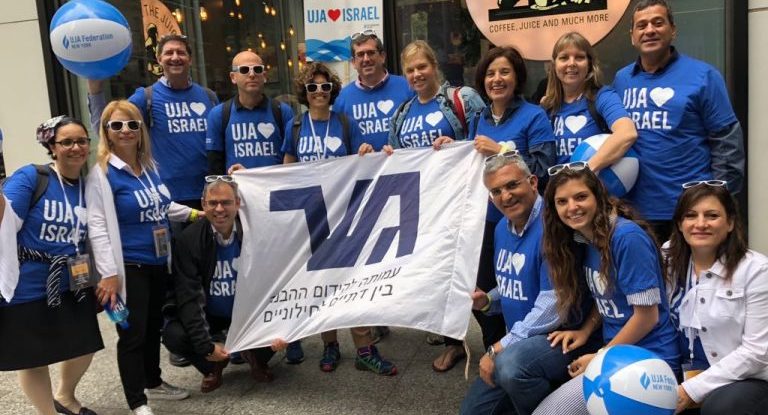 I have just returned from a very intense trip to New York. I cannot overstate the privilege it is to join the fellows of our leadership programs during the section of the program that we immerse ourselves within a Diaspora community.

There are things which are common to all of our groups. When they are exposed together and with the intensity of a full week of morning to evening meetings and discussions with local leaders, educational, lay, spiritual and professional three things inevitably happen.

This group (that we called “Gesher Olami”) was made up of men and women each in charge of the education department in their local authority. Although fulfilling the same role professionally the group was classically eclectic, as you might expect for Gesher. Men and women, secular, religious and Haredi, representing large and small towns and regions, with mixed and homogenous populations. From Haifa in the North to Sderot in the south, Herzliya with zero Haredim and Beitar Ilit and Elad with between 80% and 100% Haredim. The group was created in partnership and with the support of the UJA-Federation of New York, who like Gesher are dedicated to deepening the ties between Israel and world Jewry, and calling to action those in positions of influence to raise awareness and be involved.

What is there left to say about American Jewry. Well the first thing to say is that whilst it is often referenced in the public discourse in Israel, more often than not it appears here in a stereotypic and often demagogic fashion. All non-Orthodox Jews in the USA are “Reformim” – a word typically used here as curse word, and that the entire community (except for the Orthodox) will have disappeared within a generation. And whilst the majority of Israeli Jews and American Jews see each other as part of the same family (to varying degrees) and mutually see each other’s community as vital to the other’s long term future, the latest survey performed on behalf of the AJC shows growing divides as well. Two-dimensional (at best) conversations only lead to greater gaps between us.

There are definitely some big question marks hanging over the future of liberal American Jewry. The demographic studies are showing a generational shift and negative growth. But it is important to point out that there are still millions of Jews engaged actively in Jewish life, and this will continue to be the case for many decades to come, even according to the most severe predictions. On the other hand our group found a vibrant, passionate community, with a leadership (or at least parts of it) fully focused on the big challenges.

All this is happening on the backdrop of the strongest position, personally, economically and politically we have ever seen for the Jewish people, in Israel and beyond. Our history (as far back as the Tanach) teaches us that we are at our most vulnerable when things are going well. Along with the great success of American Jewry comes the enormous draw of the American ethos as a replacement for Judaism as an ethnic and religious commitment. In 2012 Prof. Jack Wertheimer made specific his concerns that “Jews (unlike their Christian counterparts) tend to be tongue-tied on matters of belief and religious observances but speak with great certainty about their responsibility to help repair the world. For many, indeed, the imperative of social action defines the essence of Judaism.”  On the other side of the spectrum and in a time that Israel seems at its strongest, growing sections of liberal society in the US identify it as being of the oppressors and not the oppressed. In an era when the progressive youth, including many young Jews are interested more in intersectionality than particularity, Israel and Judaism fall on the wrong side.

Educators and leaders of the Jewish community are grappling with the fact that to be Jewish in 2018 means to choose to be Jewish in 2018. In the market place of ideas, where tweets and Instagram pictures replace in-depth discussion, organized religion in general, and within that Judaism has an enormous task. Modernity continues to challenge traditional societal models, and Judaism, in its many forms has to continue to create strategies in its shadow. Across the spectrum this means different communal and educational choices – from the Haredim who fend off modernity to the maximum extent, with physical and virtual walls, all the way to the nominal Jews who remain Jewish in name alone, having embraced alternative identities of which the Jewish identity is one small part.

Our educators repeatedly saw this. At the wonderful Heschel Schoolcatering to the wealthiest Jewish community on the planet, part of their solution is a deep religious pluralism, but also deep commitment to Judaism and Israel. For those that can afford it, this commitment comes at a heavy price, $46,000 pa. At the other end of the spectrum we visited Harlem Hebrew, a very moving experience, if one that takes some time to assimilate. Harlem Hebrew is a public school run under the charter system. This means government funded (following the start-up phase) but private management. This allows for a curriculum with a very particular slant. In the case of Harlem Public, Hebrew and some Israel specific content. Given the strict constitutional restrictions of the separation of religion and state, the charter school must closely watch that it does not cross the line. Whilst the charter school model cannot replace the provision of Jewish identity the same way as a Jewish Day School (in addition to Hebrew emphasis on Jewish calendar and ceremony etc) for those for whom the alternative because cost is public school, it can provide part of the solution, with some supplemental Jewish education elsewhere. The backers of the Hebrew Public charter network have taken a bold step in trying to be creative in the education arena. In Harlem, 40% of the students would seem to be Jewish (legally they are barred from asking), and obviously the hope is that this will give enough grounding to form a lasting Jewish identity for those children.

The challenge of Jewish education and providing a rich Jewish meaning for the next generation crosses the spectrum of Jewish life, perhaps excluding the Haredi community that by its choice to remain somewhat detached from the mainstream American life and culture holds a much more traditional line. If anything their educational challenge is the opposite, how to stay within the law whilst teaching the minimal secular requirements. Along with marriage at younger age and much larger families, they are beating the global trend away from organized religion. We met with a senior leader of the Haredi community, and his response to our question, what keeps you awake at night, it was complacency. The very fact that in their own eyes (and objectively from a demographic point of view) everything is rosy in the Haredi firmament in the US it itself a possible cause for concern

The Paradox of American Jewish Life

Wherever we went we heard of the strength and weakness of the Jewish community. Our educators were exposed for the first time to the rich communal life and infrastructure. Synagogues, communities, JCC’s, Jewish Federations, the IAC and the community of American Israelis and an independent Jewish media reporting on both the Jewish community and Israel.

However we heard about the challenges. The position of Israel within the community and in particular with the younger generation and on campus. The cost of Jewish education and whether the day school model is sustainable. On the flip side the absence of enough day schools and lack of demand for an immersive Jewish education. The beauty of Tikun Olam as a major pillar of how the Jewish community acts in helping the outside world, within the USA and beyond. The problem of Tikun Olam though is that too often is has become the exclusive proxy for a uniquely Jewish life.

And of course we heard about the liberal Jewish community (not restricted to the non-Orthodox, but mainly) and their relationship with the current US administration (mostly disgust) and the affect this is having on already strained relations with Israel.

Prior to leaving for the El Al flight home we all participated along with our UJA-Federation New York friends in the “Celebrate Israel” Parade – an authentic outpouring of love and support for Israel. For Israelis who hear a very particular story of American Jewry this was a rousing experience. People were personally very moved that one of the busiest avenues (5th) in one of the busiest cities (NY) in the world would be completely closed for the over 100,000 people of all stripes and colors to parade and cheer on behalf of Israel.

Given the difficulty of getting people off screens in 2018 it is a genuine testament to the Jews of New York and those community institutions that arrange the parade, among them of course our good friends at the UJA-Federation New York.

Our leaders were not here to accept the narratives they heard, nor felt the need to be defensive of being Israeli. What was achieved was open and respectful dialogue and a lot of listening. It is only now, upon return that we can start to think about how the experience of the program affects how they deliver education in their respective towns, cities and settlements.

Without needing to make any dramatic conclusions (for which we are not really qualified) about the near or distant future of the Jewish community or its relationship with Israel, everyone came back with two connected feelings: When Gesher takes the responsibility of bringing together leaders from across the Jewish Israeli spectrum we do so in the parallel knowledge that we need these different viewpoints to build the complex perspective that truly represents Israeli society, and at the same time that same variety of views and background makes the meeting with the Diaspora communities so much more interesting and alive.

I know that Israel has much to learn from the experience of world Jewry, a living breathing set of communities continually adapting to meet the challenges of life as a vibrant minority. I also believe that a vibrant and healthy Israel is part of the underlying strength of the future of the Jewish people around the world. Recognizing that each is part of a greater whole and making that realization into a call to action to strengthen the Jewish people, wherever they lie, is a key part of the Gesher Leadership Institute, and I am proud to say that in addition to building awareness in Israel of the Jewish Diaspora, it is also making our leaders better leaders for Israeli society.

Gesher Olami is a program supported by the UJA-Federation NY